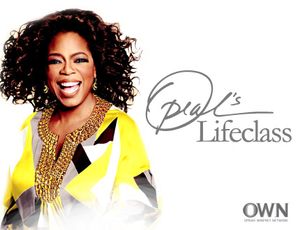 In October of 2011, my wife and I signed up for a satellite network subscription. Along with the subscription, we were given a bunch of new networks to watch on a trial period basis.  One of those was the OWN Network.  This was Oprah Winfrey's first year with her new network and she was still looking for ideas for new shows, unique guests, and new topics to explore. My wife and I had settled down for the evening and decided to explore our free networks out of curiosity.  We have always liked Oprah Winfrey and thought she was very inspirational.  Her new network was a bit raw in many ways but found the shows to be reflective.  We began to watch the first episode of a new show called Lifeclass.  The show was designed to be a program that was meant to be discussed after the program with friends or family.  It was a great way for people to constructively talk about topics they might normally shy away from. From the moment the Show started we felt hooked.  For you fellas out there... If you ever find a TV show that both you and your wife like together; watch it.  Its a rare thing to find something you both like.  So we did.

After the first episode my wife said that I should try to find the website for the Lifeclass show and sign up for our Lifeclass Journals.  The journals were a way to participate in the discussion at home by your self or with a group.  When I saw the website I noticed a spot where it said, "If you like the Oprah Lifeclass show, send us a video and tell us what you think.  By this time it was 11 )'clock and I was in my home recording studio like usual.  I thought to myself, "Why should I just say something?  Afterall, I'm a songwriter I should write some music or something".   So I took a look at all the topics for all the shows for the first season, and found a creative way to put them together into the words of a song.  I wrote a melody and put some guitar chords to it, and before you knew it, I had a song called, When You know Better.  The chorus of the song was a quote by Maya Angelou, a famous author and poet that was a favorite of Oprah's. The quote said, "When you Know Better, You do Better."  I thought this was a great quote for me personally.  It means something like this; when we make a mistake we should remember what we did wrong and figure out tools to help us do better the next time around.  And afterall, I've made plenty of mistakes, so I know that making mistakes is easy. Learning from them and trying it again, is the hard part.

So I finished the song, recorded a simple version of it in my studio and then made it into a video by putting a slideshow of family photos in the background.  I wasn't worried about having it be too fancy because I truly believed that it was 11 O'clock at night and I didn't believe anyone looked at this stuff anyway. Well, turns out, I was wrong.  Three days later I was sitting in the kitchen with my wife and the phone rang. the phone caller ID said, Harpo Inc. We knew right away that that was Oprah company and picked up the phone.

They told me that they heard my song and Oprah loved it.  she wanted to have me sing the song on the next episode, and by the way, they wanted me to do it LIVE on camera.  And because I didn't have time to think about how terrifying it was, I said yes. Of course I was terrified to sing live on the show, but my wife was incredibly supportive and the production staff made me feel completely at ease.

People always ask me about the Oprah Effect.  The Oprah Effect, I guess, is some kind of effect that happens after people have been on Oprah Winfrey.  These people seem to see success overnight and undergo complete transformations. Well, I'm not sure about all that.  I'm still the same guy in alot of ways that I always was.  I'm not rich.  I'm not ultra famous. But I have to admit that ever since I was on Oprah, some things about me have been dramatically changed for life.  Here are some of the ways I have changed:

I used to be so worried about what other people thought of me.  But the next thing that changed was that I no longer cared what other people thought.  I stopped listening to the voices of the people around me when they told me things that I knew weren't true.  I started listening to my inner voice, and more often than not, my inner voice has been correct.

The last thing is all about confidence. When you stop listening to the negative people around you and you stop being afraid, you find an incredible sense of confidence. I went from the guy who asked "Why me?" Why do I deserve to be famous?  To the guy that said, "Why not me."  And like Robert Frost Said, "And that made all the difference."

So, is there an Oprah Effect?  Maybe.  Or maybe I'm just like Dorothy in the Wizard of Oz; I had the power within me all along. All it took was the experience of being on Oprah to make me believe I was worthy of success.

Oh I've taken a knock or two
But when you know better, the better you do
I got the hope to make it through, because of you
But you've been there all along (Oprah)
So now I'm givin' his song, to you.

How my joy is rising
I've become what I believe
With my age I've found the time
To appreciate true beauty
No one else can take the blame
For the life I've had to live.
It seems I've had the strength to take
Give me the strength to give.