A Little of Both 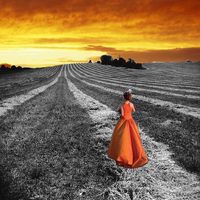 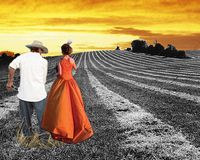 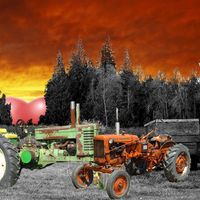 It was 1952 on the day that they met
Allis wore and orange dress that matched the sunset
John was plowin' up cropland for the very first time
Some called it love at first sight
It was not soon after that John said, "Be Mine"
It was under the willow tree that they would combine
so they sat and watched the sunset and confessed their love
And it was always enough
John said Allis you got a beautiful design
And they made hay while the sun shines

My stepfather, Keith Larson was a machinist. He was a kind and hardworking man who was a great husband to my mother, but not always the warmest and fuzziest father. Although he loved us, he didn't know how to show it, except through the things he could do for us. He's show his love by fixing the brakes on our car or once he built me a minibike. Although we never had what I called a loving relationship, I knew he loved me. When I became an adult, and got married and had children of my own, I thought we could find a project that we could do together. Keith had gotten an old Allis Chalmers tractor from his father when he passed. It need alot of work and I thought that working together with him would be a great way for us to bond. As we worked on the tractor I got to ask him about his childhood, his previous marriage and many other things that we just never seemed to have time to discuss. The project took all summer long. Towards the Fall the tractor had been sitting in my yard for almost 4 months like a giant lawn ornament.One night as the Fall sun started to set, I could see the silhouette of the tractor in front of an orange and pick sky. And although I know it sounds strange, I though the tractor, whom I affectionately called Allis, looked lonely. So I invented a story to make her life more full and worthwhile.

Not all love is the same. Some people show their love by saying I love you, some show their love through the things that they do. Neither one is better than the other, just different. However, saying you love someone without showing them leaves a person feeling like the love is shallow, and only showing someone you love them never makes it seem real enough or concrete. So my suggestion would be to do a little of both. In the case of my stepfather, I knew he loved me but I never had the satisfaction of hearing him say it out loud to me. In the case of my real father, he told me he loved me all the time, but rarely came through when I really needed him. A person needs a little of both.